I have totally got the Pop Up Restaurant bug and my latest foray was to Chef Chris Bailey’s Pop up at Lucky Beach down in the Arches on the Brighton seafront. His website promises:

“an obsession with great produce and seasonality. Food with interest, humour, texture, clarity but firstly flavour.”

The menu that follows packed a lot of punch on all accounts:

On arrival we were presented with Iced tomato gazpacho essence seasoned with vodka and sherry. This was delightfully fresh and tasted of the Mediterranean, and kept us happy while we perused the wine list. 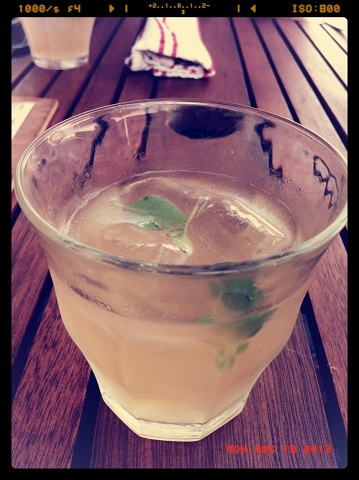 This was shortly followed by a smorgasbord of a delectable treats to be shared with / fought over by our fellow diners:

Tasting highlights included the pork candy floss topping the whipped cod sitting on potato skins. The chicken wings were perfectly served on individual spoons with an unusual charcoal mayonnaise which also lent itself to the pickled cockles presented in a suitably retro dish.

The sour dough bread and freshly churned butter presented on a black pebble (thoroughly embracing the seaside theme) was a nice touch too:

The courgette flower that came next epitomised the taste of summer with a deliciously lemony goats curd filling:

The smoked mackerel brought some drama to the proceedings with the smoker placed right next to the tables, and provided a deliciously subtle smoky flavour to this twist on the more traditional battered fish and chips. The plum ketchup was a highlight and cut through the oiliness of the fish and the ‘batter bits’ perfectly: 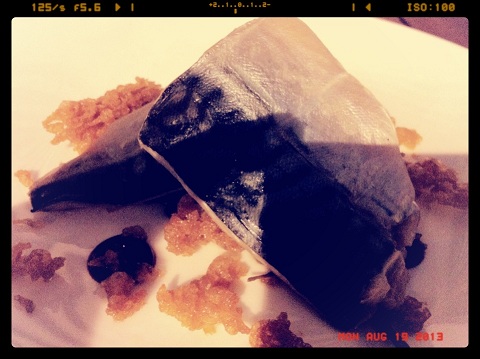 The boudin blanc (aka white sausage) with trout caviar (a new experience for me) was accompanied by a deliciously umami, cognac sauce. The seaweed added further savoury notes. 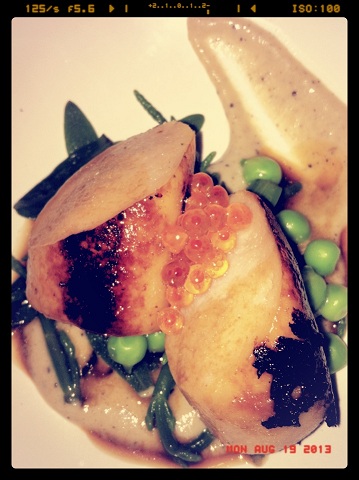 My personal favourite then followed with a dramatic lobster claw served on purple potatoes and with a very fresh lettuce gazpacho. Wild pea flowers added further flavours and textures, as well as a feast for the eyes:

We were then onto the puddings, which started with a small but perfectly formed flourish of a single cherry stuffed with chocolate. This was a huge hit with the girls, and appropriate enthusiasm resulted in some left overs surreptitiously being left on the table! The meadow sweet air provided a wonderfully floral accompaniment. 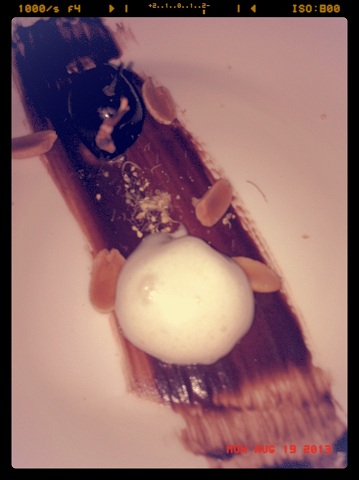 Further drama ensued with the appearance of a pair of scissors being laid on each table inviting intrigue, followed by straws filled with sherbet powder. The duck egg custard with Pimms jelly then appeared, piled high with lots of goodies and was topped off with elderflower and gin foam at the table: 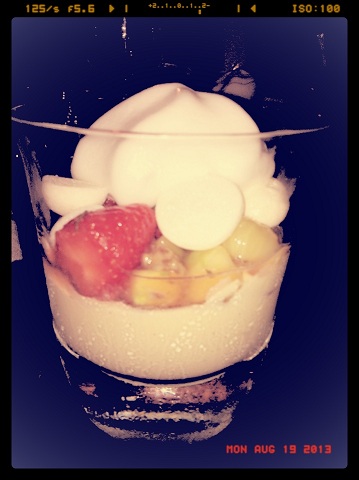 The invitation was to experiment with either sprinkling the sherbet over the pud or just to down it as a oner as per school days.

The final flourish before the evening’s entertainment ended (we were eating until 11.30pm) was a tray of freshly cooked doughnuts with a dipping sauce of lemon curd: 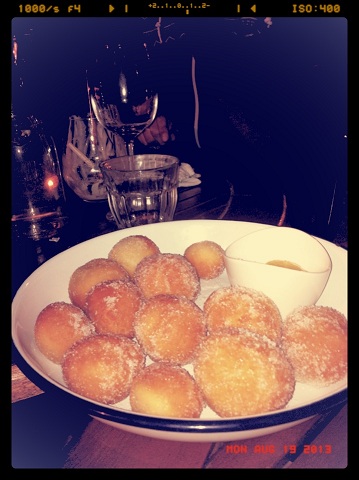 The evening was a total pleasure and given all the courses, at £50 per head it felt like good value, especially combined with a seaside location and the sound of the sea as a background drop (later drowned out by A-Level result celebrations – but this is Brighton!). Nice touches included Chris personally greeting people as they arrived and also being available to talk about the food over the course of the night. Here is definitely a man who is passionate about food…

Details of future Pop Up events at Lucky Beach can be found here: http://luckybeach.co.uk/events.html.

With friends coming to stay this weekend, I was looking for a recipe to truly impress even the most sceptical of traditional eaters that the world of raw may have something to offer. This totally indulgent chocolate truffle recipe (aka Brigaderios) from Matthew Kenney’s Everyday Raw Desserts certainly hit the spot and may well be a regular – rolling them in chocolate nibs gave a satisfying crunch ensuring that they were a little out of the ordinary. Taking only 20 minutes to whip up 24 of these beauties they come thoroughly recommended…